Zorra invites us to bake a Kings Cake for January 6. 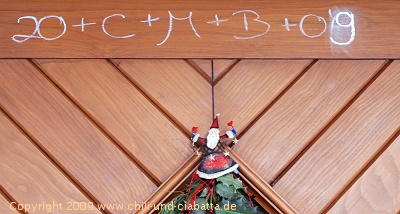 In these days the Sternsinger (see Star Boys' Singing Procession for Germany) – children dressed as the 3 kings – visit almost every house here, collecting money for charity and writing C+M+B (the abbreviations for "Christus mansionem benedicat", some believe it to be the initials of the three kings' names) above the main door of the home to confer blessings on the occupants for the New Year. 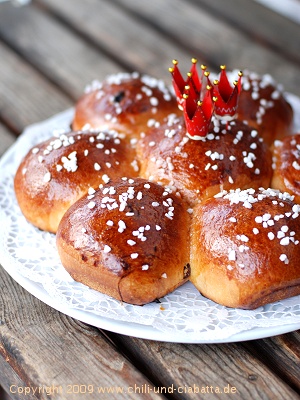 Although a kings cake has no tradition in our family, for me it's the third one: in 2007 I baked a mexican rosca de reyes, in 2008 a french gâteau des rois and this year I chose a swiss Dreikönigskuchen.

It was me who found the almond 🙂

Make a yeast dough by hand or machine, kneading in the raisins at last.

Let the dough rise in the refrigerator for about 4 hours, then turn it out onto the working surface.

Divide the dough into 6 smaller parts (mine were about 140 g) and one bigger part, roll the dough into balls, placing the almond into one of the balls.

Butter a tart pan (30 cm diameter) or use baking paper. Put the big ball in the middle surrounded by the smaller balls. Cover and let ferment in a cool place until doubled (I used the cool cellar steps which took about 4 hours and 1 hour at room temperature; you can also leave the cake in the fridge overnight).

Brush the cake with an egg yolk mixed with some drops of water or milk.

Bake the cake in the lower third of the oven for about 40-50 minutes.

Remove the cake from the oven and put it on a rack.

Mix the apricot jam with 1-2 tb of water (it should not be too fluid), warm it up a little bit and pass it through a sieve. Brush the warm cake with the jam and sprinkle with coarse sugar.