In Bavaria, where I live, rye breads with spices are quite common – usually they are flavoured with a special Brotgewürz (bread seasoning), often containing fennel, coriander and caraway. Unfortunately I’m not really fond of this bread, so I was looking for something different.

Yesterday I was flipping through Bernard Clayton’s New Complete Book of Bread when my eyes fell on a recipe for Pfeffernussbrot (pepper spice bread). Yes – very interesting idea! This recipe was handed down by Germans living in Russia, who had settled along the Volga and Black Sea at the invitation of German-born Catherine the Great – and it fits perfectly in this season where Christmas Cookies and Lebkuchen are baked in almost every family in Germany. 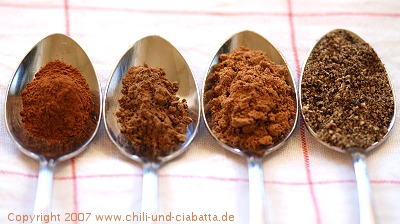 The spices: cinnamon, allspice, Lebkuchen-Gewuerz (a  spice mix containing cinnamon, orange peel, coriander seeds, mace, nutmeg, cloves and cardamom which I substituted for Clayton’s aniseed) and freshly ground black pepper. Besides the spices some roughly chopped walnuts (or pecans) are added to the dough. 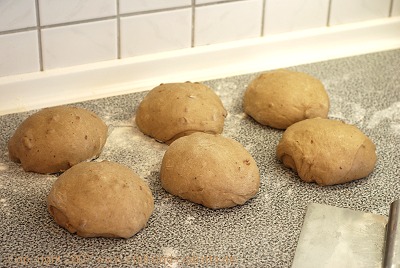 The preshaped balls for 2 braided loaves 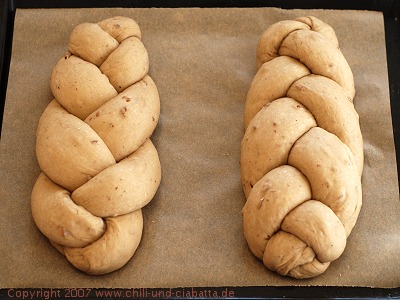 The braided loaves ready for rising 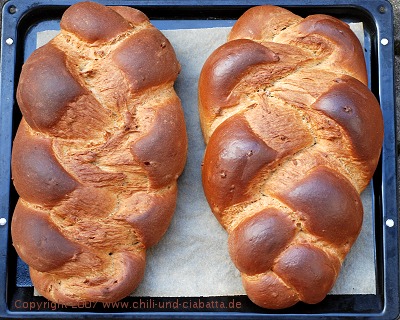 The baked loaves. I brushed the right one with a little bit of milk before baking. This gives a shiny surface. 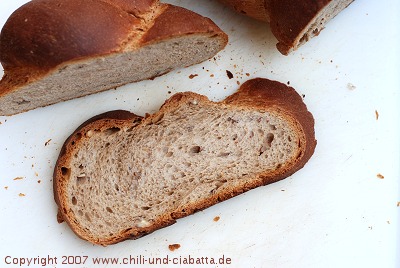 A slice from the bread. I was astonished how good the bread tasted! It isn’t too sweet and has a complex and seductive flavor with a slightly peppery aftertaste. The crumb is fluffy and soft, the crust a little bit crunchy.

To make the sponge, in a mixer bowl measure 300 g (2 c) flour and add the yeast, salt, sugar and dry milk. Stir in the water to make a batter. Cover with plastic wrap and put aside at room temperaure to bubble and rise more than twice its original volume, about 2 hours.

To make the dough, uncover the sponge and stir in the butter, using the mixer. Add the eggs one at a time. Pour in the molasses, blend, and add the pepper and spices. Add the broken walnuts.

When all the ingredients have been added, stir in additional flour until the dough is a rough mass that can be lifted to the work surface – or left in the mixer bowl and kneaded under the dough hook.

Knead by hand or in the machine for 10 minutes (Kenwood 2/3) until the dough is smooth and elastic.

Transfer the dough from the mixing bowl to a lightly oiled bowl. Cover with plastic wrap and leave at room temperature to double in bulk, about 1 1/2 hours.

Divide the dough in half. For braided loaves divide each ball in 3 parts. Preshape lightly into round and let rest for 10 minutes. Shape the balls into little logs. Start by rolling one piece of dough on the counter into as long rope, 35 cm (12-14 inches). Keep the rest covered while working with one-at-a-time. Taper both ends of each dough rope down so that they are narrower than the rest of the dough rope. Braid from the middle to one end, pinch to close and then turn the braid around and braid the other end. Place on a baking sheet covered with baking paper. Repeat for the second piece.

Cover the loaves and leave at room temperature until they are puffy and have doubled in volume, about 45 minutes.

For a shiny bread brush with milk.

Bake in the oven for about 50 minutes. The loaves should turn dark brown.

Remove the breads from the oven and let cool on a rack.