"The proof of the Pudding is in the eating" says an old proverb  – and I am very happy that zorra chose this motto for Sugar High Friday, the great event she is hosting this month. Otherwise I probably would have never tried the recipe which has been sleeping in my recipe database for years …

Last week I made my first sourdough Panettone (it tasted really good but unfortunately wasn’t quite as fluffy and light as I had hoped.) Reading zorra’s own entry for SHF I remembered a recipe for a Sformato di Panettone, a Panettone Pudding. When you stumble upon Panettone Pudding this often is a kind of bread pudding – but not this one. Here the Panettone is totally dissolved in the custard. I’m sure if somebody eats this without knowing the name he will be very curious what the special ingredient in this pudding could be! 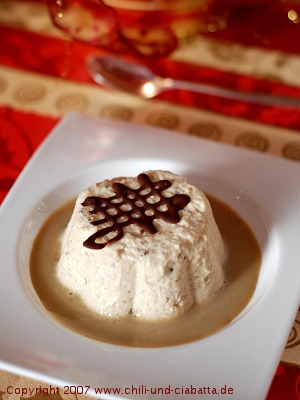 I served the Sformato di Panettone with a coffee sauce which goes very well with the creamy pudding.

Place the milk and the Panettone in a saucepan. Bring to a boil, stirring frequently. Let simmer until mixture thickens.

Beat eggs and sugar until fluffy. Dribble about half of the hot panettone-milk into the egg mixture, then place all of the egg mixture into the saucepan over medium heat. Heat to 77°C (170°F) and stir for about 3 minutes (don’t boil). The mixture will be thick. Remove saucepan from the heat.

Meanwhile soak the gelatin sheets completely in cold water for about 5 minutes. Squeeze excess water from softened gelatin sheets and add them to the hot mixture, stirring well. Let cool.

Beat chilled whipping cream into stiff peaks and fold it into the Panettone Custard.

Fill jelly moulds (pudding forms, about 125-150 ml each) or cups with the Panettone pudding and place them into the fridge overnight.

For the sauce place the milk in a saucepan and bring to a simmer. Beat egg yolks and sugar until light in colour. Slowly add some of the hot milk to the egg yolk mixture, permanently stirring. Then add the egg mixture to the rest of the hot milk in the saucepan. Add the instant coffee and stir until the custard has thickened and will coat the back of a spoon. Strain and let cool.

Unmould the puddings by running a knife around the top edge of each mould and dipping the mould into hot water for a few seconds. Turn them out onto plates and surround them by the coffee sauce.