After spending 3 1/2 weeks in Ticino (Southern Switzerland) I had to reactivate my sourdoughs for a few days – after all I wanted to take part in Bread Baking Day Round 3, this time hosted by Ulrike of Küchenlatein. The theme: bread with sourdough, preferably from rye.

So I decided to make just this: a 100% rye bread with rye sourdough. 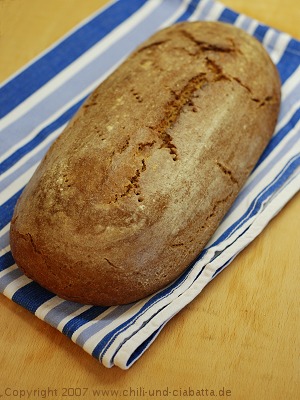 As rye flour I used swiss "dunkles Roggenmehl" which was a gift from a friend.

The smooth and shiny surface of the bread comes from a glaze (corn starch and water are boiled and cooled) which is brushed onto the hot bread right out of the oven. 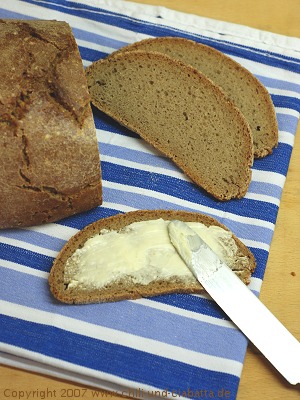 I like the bread thinly sliced and buttered. It tastes great with cheese, but also with a sweet topping like honey or my grape maracuja jam 🙂

Baking day: Make a dough from rye flour, sourdough, water and salt*. Let rise in a large, lightly oiled bowl. Cover and let rise until almost doubled (time depends on then activity of your starter, here it was 4 1/4 hours).

Put the dough on your lighty oiled work surface and divide it in two halves. Form each half into a log (it’s good to use oiled hands as the dough is very sticky).

Put the logs into well floured bannetons and let rise covered for about 1 hour.

Sprinkle some corn meal onto a baking peel. Turn the breads out onto the peel and pick them several times with a fork.

While the bread is baking make the glaze: mix corn starch and cold water, bring to a boil. Let cool. Brush the bread right out of the oven with the glaze. Repeat when the first glaze has dried.

*First I used my Kenwood kitchen machine, but it had problems to mix the dough properly so I finished kneading by hand.

Rye breads with the typical dense crumb. They taste very good thinly sliced, not too sour.