For the 17th edition of IMBB: taste tea which was announced by Clement of A la cuisine! I wanted to tell you a little bit about the ceremony of drinking mate in Uruguay.
This is a text I originally wrote in German (sorry for the non-perfect translation – den Text in deutsch gibt es hier).

Our
17 year old daughter Franziska just came back from Uruguay where she
spent one year as an exchange student. Before her departure she sent
us a parcel with some specialities, including Dulce de Leche,
a cookbook about uruguayan cuisine, and of course Yerba Mate for
preparing mate, the national drink of Uruguay. Besides Uruguay this
kind of tea is widely spread in the south of Brazil, in Paraguay and
Argentine. 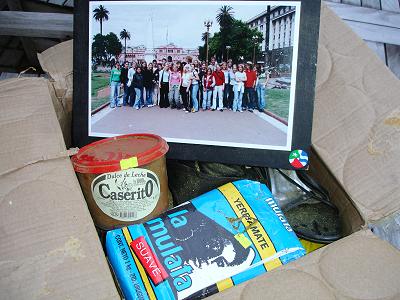 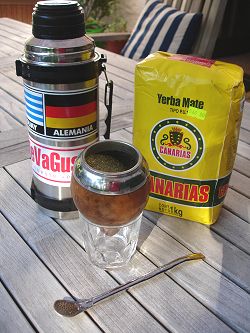 What do you need to prepare mate?

A Thermos bottle ("Termo")
for the hot water. It has an handle and can easily be opened with one
hand. You bring water to a boil and fill the thermos with it adding
a dash of cold water (the ideal temperature should be around 160°F,
70°C). The Thermos is often decorated with adhesive labels, often
referring to personal preferences. So you could use stickers with names
of bands, political parties or sports clubs.

The Mate Herbs ("Yerba
Mate") are the leaves of Ilex paraguariensis, a 6-14 m high tree
indigenious to Brazil and Paraguay. Yerba mate has been used as a
beverage since the time of the ancient Indians (it was even found as
burial objects in graves). 1578 spanish Jesuits got to know the tea
from Guarani indios and started to grow plantations of the wild species
in Paraguay ("Jesuits‘ tea" or "Paraguay tea") They held a trade
monopoly for Latin America until their withdrawal in the 18th century.

Harvest: whole
branches with leaves are cut, then held over an open fire or roasted in
wire cages over fire. This deactivates the enzymes in the leaves, the
green color of the leaves is retained and specific flavors are
formed. They then are toasted dry in large pans over a fire or inside a
brick oven-resulting in a finished brown-leaf tea. For more information
see Wikipedia or tropical plant database. For fotos of trees and leaves click here.

Yerba Mate has a caffeine content of about 0.5-1.5%, responsible for its stimulating effect.

In
Uruguay Yerba Mate is often sold in packages of 1 kg. Well-known
manufacturers are e.g. Canaris or la Mulata. You can buy different
types, such as "suave" (soft) or normal.

The Mate container
from which you drink your tea. Mate derived from the Quechua word
mati and means calabash gourd, the fruit of Lagenaria vulgaris.

Gourds as
drinking containers are most common, they often have a metal ring
around the upper hole. Sometimes they are decorated with leather or
carvings. There also exist pots made from clay, wood, metal or even
cow’s horn. (fotos). The
gourds cannot stand alone because of their conic form, so you often put
them in a drinking glass or the cap of the thermos. 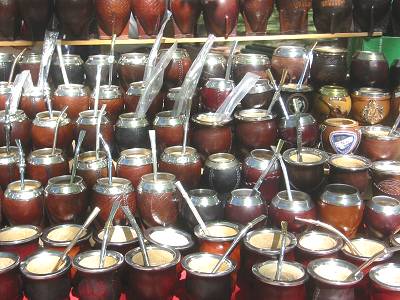 Different gourds on a market in Uruguay

To drink the mate you need a straw
with a sieve on the bottom, called Bombilla. It is made of stainless
steel or Alpaca (German silver), often decorated with gold on the upper
side where you sip your mate. There exist also bombillas made of
bamboo. You can pay as much as 35 Dollar for a special bombilla! 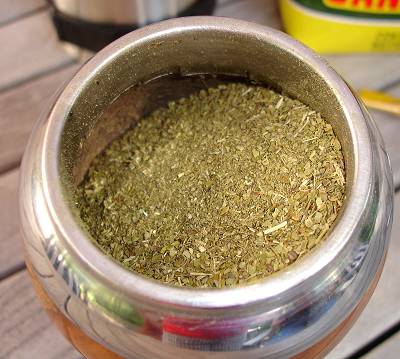 You
fill your gourd about 2/3 to 3/4 full of Mate. Cover the gourd with
your hand, turn it upside down and shake it vigorously. This moves the
coarse yerba to the bottom in order to prevent the straw (bombilla)
from clogging.
Turn it back over carefully on its side. Try to keep
the yerba inclined along one side during the entire preparation and
drinking process. 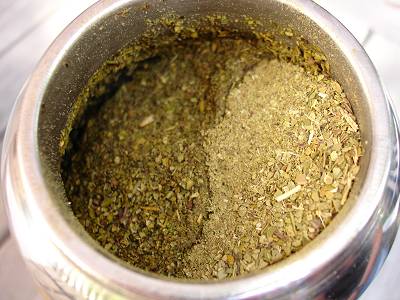 Now
you add a little bit (a "chorro") of cold water and let it soak
("chupar") into the yerba. There has to be still some dry herbs. 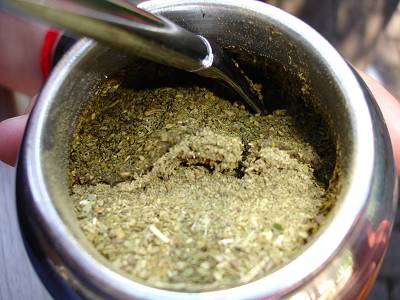 Now
you take the bombilla and put it into the gourd. You use the side of
the straw and the sieve to make a hole ("pozo") between herb and the
side of the bowl. 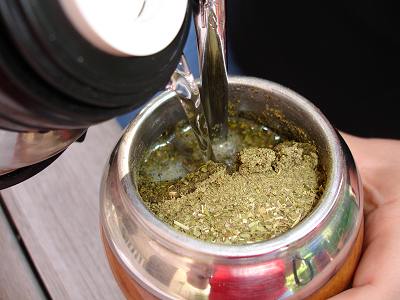 Now you add some hot water into this hole – this water will also be soaked into the herbs. There will still be dry yerba. 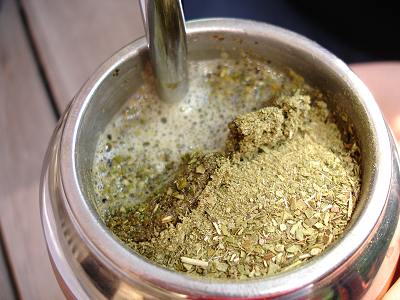 When
everything is soaked you add more hot water. This first infusion is
very bitter and not very much liked. It is traditionally drunk by the
person, who serves the mate (the "cebador"). The taste of mate is a
little bit special, it resembles strong traditional tea. There are also
people who drink their mate sweetened (mate dulce), here you put a
generous spoonful of sugar on the herbs before each filling with water. 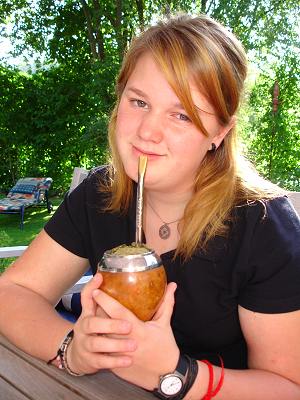 The
bombilla is never touched while you drink, the cebador is the only
one who is "entitled" to move it in case it clogs. Each mate serving is
meant for one person, who should sip through the bombilla until a
gurgling sound gives the evidence that there is no more water to suck
through the filtering straw. Now the cebador will fill it again with
water and pass it to the next person. Don’t say "gracias" because this
would mean that you don’t want any more mate.

If the cebador passes you the mate you will stop other activities like e.g. straightening your hair ("planchar el pelo").

The refilling and drinking is repeated until most of the taste has gone ("mate lavado"), this takes 10 refillings or more. 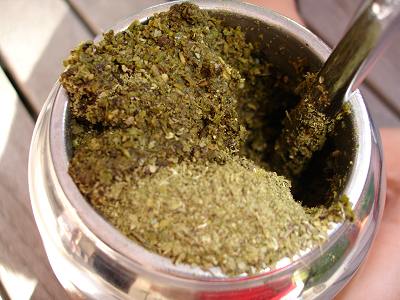 Now
its time for the "vuelta", the turn. You put the bombilla in one half
of the dry herbs and push it onto the opposite side. Now the "pozo" has
a new position and you can add water to unused yerba. The vuelta can be
made again with the second half of dry herbs. At the end all water from
the thermos will be used.

When do you drink mate?

– in the morning instead of tea or coffee
– at work (at school it is forbidden!)
– when you go to the bakery or to the doctor (you take it everywhere where you expect you will have to wait)
– in the afternoon at the "merienda" with bizcochos (cookies), tortas fritas (on a rainy day) or sausage sandwich
– at social meetings
– at meetings of teenagers in squares (plazas) or parks (prados)
– older women often sit in front of their houses sipping mate and watching people passing by 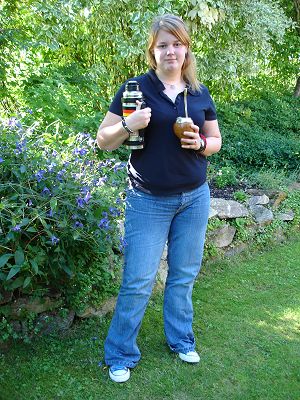 You
take your mate everywhere: typically you take the thermos at the handle
and put it in the crook of the arm, the other hand holds the mate.